Users of VPN services pursue various goals. Some of them just look for some privacy, trying to keep their IPs a secret. Others want to download content via torrents or use streaming services. Still others live in the countries with really draconian laws and restrictions – their goal is to feel the air of freedom, bypassing the governmental censorship. No matter what your goals are, there are a lot of VPN services providers around to choose from. However, not all of them are equally great. One of the top-ranking providers is HideMyAss VPN, which is known for an enormous number of servers worldwide. Though the service is severely criticized by some users, it has some apparent strong points. In our HideMyAss review we’ll cover both advantages and disadvantages of the product.

Though in most comparative reviews HideMyAss is ranked among top-5 or top-7 VPN providers, in the key areas it lags behind the industry’s leaders. We’ve conducted our own independent investigation and received the following results:

As you see, in most cases, HideMyAss VPN performance can be described as reasonably good but not great. That said, we were pleasantly surprised by its speed. Though as a whole it is not the fastest in the industry, it has easily outstripped even some premium providers. Read the whole HideMyAss review for details.

HideMyAss is chosen by regular users for a variety of reasons. Here are its main advantages that we were able to figure out.

However, you’ll find a lot of criticism regarding HMA policy and performance on the web. We’ve checked the most popular complaints and singled out certain disadvantages of HideMyAss as well.

Also, before you order HideMyAss download, read the terms and conditions of their refund policy carefully. There are certain restrictions, and users tend to complain about not being able to get the refunding.

If compared to others, HideMyAss has a limited range of features. However, we wouldn’t describe it as an entry-level solution at least due to its impressive facilities and resources. Once again, we’d like to remind that it is the only major VPN provider with its own servers in 190 countries, including some rare and exotic destinations, such as African states and unknown islands in the Pacific Ocean.

HMA is one of the largest providers of VPN software in the world. As of now, it covers 190 countries and offers over 110 thousand IP addresses. Some time ago, it merged with the Czech-based Avast group of companies. However, HideMyAss VPN software provider is located in the UK, which negatively impacts its popularity. The thing is that the UK is known for its severe restrictions in the online sphere and a strong governmental control. According to the inner laws of the country and the Investigatory Powers Act, all providers of VPN products are obliged to collect and preserve users’ log for a certain period of time. That is why those looking for the maximum privacy won’t find it here. 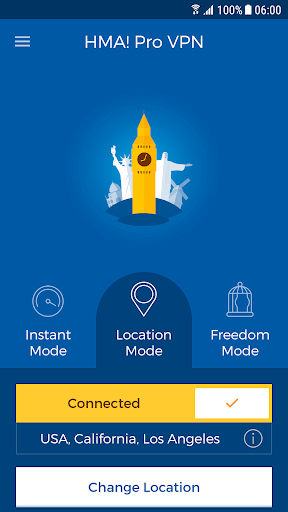 The key tasks of any VPN provider include ensuring confidentiality on the web, unlocking an access to otherwise inaccessible platforms, and bypassing restrictions imposed by governmental agencies and special services of certain states. HideMyAss VPN copes with these basic tasks quite well. It is compatible with multiple platforms, including mobile operating systems. You may use it on Android and iOS, as well as on Mac, and, of course, Windows. Purchasing one license, you may connect under it up to 5 devices simultaneously. HMA supports several protocols. By default, the OpenVPN protocol is used. Other available options include PPTP and L2TP. IPsec is used in the iOS app.

Instead of the familiar Kill Switch feature that is found in many VPN products these days, you’ll find a proprietary HMA Secure IP Bind function. Basically, it is also intended for the cases when the VPN connection is unexpectedly failed. It lets you compile a list of apps that should always work only via VPN. If the connection is lost, the app just turns off.

There is a section dedicated to HideMyAss proxy on their official site. However, the new HideMyAss free proxy list itself is still unavailable. They promise to publish updates soon, and we hope that in the nearest future, we’ll see a HideMyAss proxy list.

The next thing we can’t but mention in our HideMyAss review is its capability of unlocking an access to streaming services and torrent platforms. There is one important limitation though: torrenting is allowed only when you connect to the servers located in the countries where it is legal. Moreover, you can download only the content that is not copyrighted.

As we had mentioned in our HideMyAss review previously, this VPN service demonstrated a surprisingly high speed of internet connection via remote servers. Of course, as usual with VPNs the speed is inconsistent and depends on the selected server and your physical location. But in general, HMA is reasonably fast. That said, we didn’t notice any IP or DNS leaks during the tests.

HMA offers proprietary extensions for Google Chrome and Mozilla, though they are not broadly advertised. You can find direct links to downloading these add-ons in the Help sections of the HMA official site. The extensions act as web proxies: they help you to hide the IP address but they don’t encrypt the data. For an anonymous connection via proxy, some servers in the US, UK, and Netherlands are used. When connecting, you may choose a suitable server from a HideMyAss proxy list.

The privacy policy of HMA causes many questions. The provider officially says that it collects and keeps the logs of users and their real IP addresses. At the request, this information can be provided to the law enforcement agencies. All the data is stored for two or three months; after that, it is deleted (allegedly). Moreover, as you remember, it is under the jurisdiction of the UK, which automatically means that it must comply with its legislation. If past experience is anything to go by, you are not going to have any problems with the law until you are not involved in something criminal. And still, customers don’t like the fact of collecting and storing any information about their activities on the Internet.

HideMyAss VPN uses AES256-bit encryption for the control channel, which provides a high level of protection. The data channel is encrypted with a 128-bit cipher. As we have already mentioned, the OpenVPN protocol is used by default.

If you have made your mind up to using HideMyAss download it from the official site only. On its Pricing page, you’ll see that only one plan is offered by the provider. This plan includes all the available tools. However, the price for this plan can vary from $6.99 to $11.99 per month. The discount depends on the number of months you pay for. The largest discount of 42% is given to those who buy a 12-month plan.

HMA doesn’t offer a free trial period to its customers. It’s a pity, as many of us would prefer to test the product before deciding on its acquisition. That said, they do offer a 30-day refunding period. However, there are certain limitations: firstly, it must be your first purchase of the software, and secondly, the volume of bandwidth used must not exceed 10 Gb.

When it comes to payment methods available, the selection of options is a sort of unusual. Thus, you may pay for the software via the direct wire transfer. Of course, Visa and MasterCard are accepted as well. Alternative methods include e-wallets (PayPal is among them). However, no cryptocurrencies are allowed.

The quality of customer support is an important indicator of the overall company’s attitude towards its customers. In the case with HMA, the impressions from the support are controversial. On the good side, they have a well-designed Help section on their site. It includes a knowledge base where all the answers to popular questions are collected, a guide for beginners with detailed instructions and a “community” section where you can ask for other users’ advice. Essentially, the Help covers all frequent questions – from the HideMyAss free proxy list to the instructions of how to prevent DNS leaks.

If for some reason you need a consultation with a live agent, you can do it also. There is even more than one channel of communication. You can send your ticket via e-mail, ask your question via social media, or write directly on the site using a live chat option. The latter is a preferable way of communicating for most users but in this case it is not the most effective one. You can wait for an answer for several hours, and when you finally get it, chances are it will be just a standard come-off. Some customers complain about the low professionalism of support agents, but we didn’t encounter this problem.

How to Use and Installing 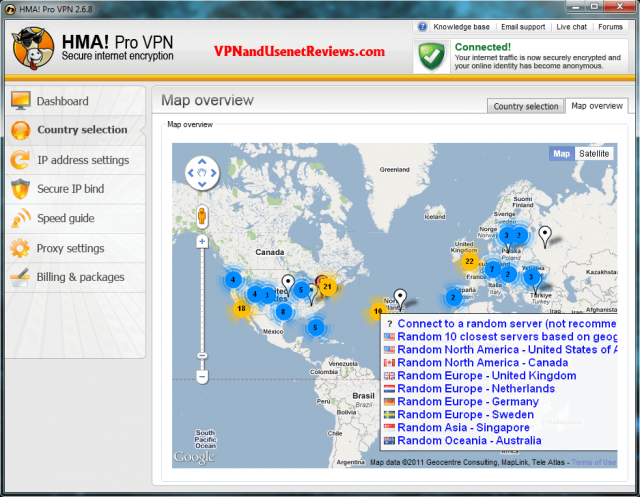 The process of HMA software downloading and installing rarely causes any difficulties. The site has a very laconic, minimalistic design, so it’s almost impossible to get lost there. To get access to the HideMyAss download link you need to create an account. It doesn’t take much time, but beware that you should enter a valid e-mail when filling in the form. As soon as an account is created, you may download and install software on the chosen platform. When running the VPN client on a computer for the first time, you’ll be requested to enter your login and a password, choose the protocol (usually OpenVPN is the best option) and choose the server from the list. After that, you need to confirm a new IP address and can start utilizing it for web browsing. If you want to cease using VPN, simply click the Disconnect button. When necessary, you can connect once again in a moment.

In the framework of our HideMyAss review we’ve tried to analyze the weak and strong points of the popular VPN service and give a comprehensive estimation of its products. The results of the investigation are controversial. Of course, the software is not flawless. First and foremost, its downsides are associated with its privacy policy. The VPN provider that collects and stores users’ logs always carries less credibility than those that guarantee no logs collection. After all, you never know how this information will be used and who will use it.

On the other hand, HMA has certain advantages. Thus, it has the widest coverage among large VPN providers. Its servers are present in 190 countries – this is really a whopping figure. More than that, independent speed tests prove its excellent performance. HMA allows hassle-free streaming and torrenting: it helps to easily unblock content that you can’t access from your real IP address. Finally, the software is quite flexible and easy to use.

Thomas Moran
For over 5 years I've worked as Tech Expert, so let me work with you.
Visit HideMyAss
User Reviews
Leave a ReviewLeave a Reply Cancel Reply